For Healthcare Providers
Request An Appointment For Prosthetic/Orthotic Services

Rhode Island Limb Prosthetics, Orthotics and Physical Therapy is a 3rd generation family practice. We use our comprehensive clinical knowledge to combine today’s state-of-the-art and innovative technology with our family values and experience. 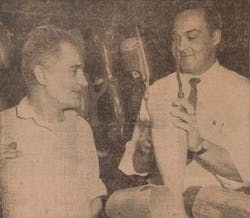 The soldier returned home with a Purple Heart, an artificial leg, and a great deal of shattered confidence.

He faced the problem of earning a living. His former job as a roofer and tinsmith was out. One day in 1949 he dropped into the Rhode Island Artificial Limb Co. in Providence for repairs to his leg.

The company makes, and fits, artificial legs and teaches amputees how to wear them. Mr. Teoli was offered on-the-job training in the business. Four years later he bought a 50 percent share. Last June he bought the entire business.

Now the disabled veteran is head of his own artificial limb shop in Rhode Island, servicing about 800 to 900 amputees a year.

Among the other things he brought home with him from the service was a second lieutenant. 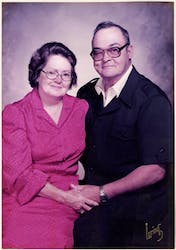 The officer was his nurse, Kathleen. Mr. Teoli was her first patient at the hospital. The private first class married her at Fort Belvoir, VA.

The company holds contracts with the Veterans Administration and the state Department of Education vocational rehabilitation department.

"Artificial legs are a wonderful substitute, but they're nothing like your own, no more than false teeth," he said. "In this business you're close to your customers. They get to depend on you."

In the early 1970's, Albert and Kathleen’s son, William, graduated from New York University with his degree in Prosthetics. He became a Certified Prosthetist and continued growing the family practice. William (Bill) Teoli, CP, moved the family business up the street to the current Cranston location at 1559 Elmwood Avenue. The company soon became Rhode Island Limb Company in which he owned and operated for the next several decades. William married Elaine and had three children; Jonathan, Courtney and Danielle.